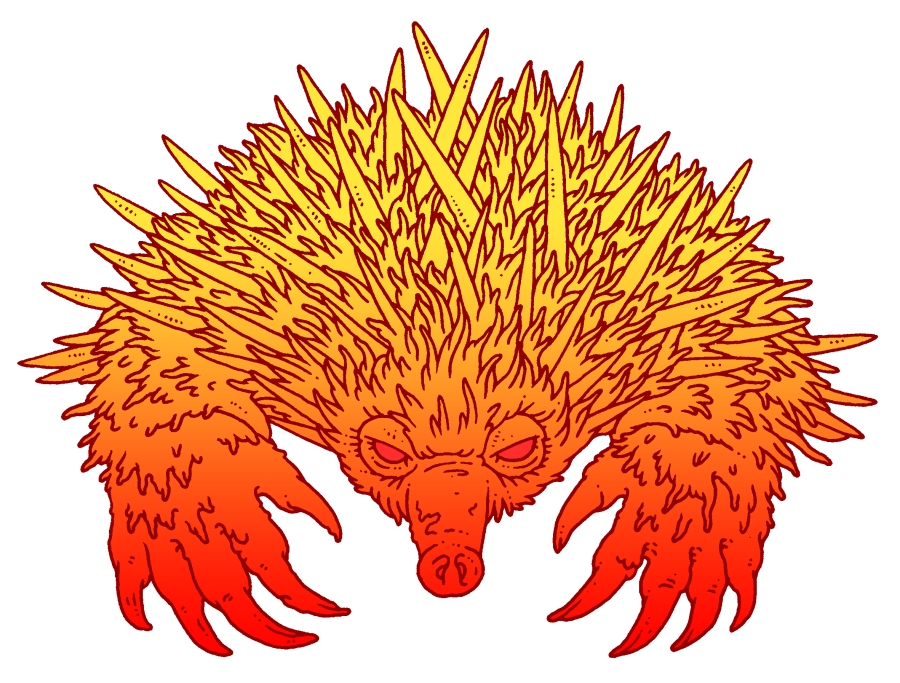 ‘That creature that feeds on life is me. The Anteater.’

Anteaters are some of the weirdest creatures in the world, I’ve always thought. The aardvark, the giant anteater of South America, the pangolin. Australia, of course, has its own examples. In the forest of south west Western Australia, where I come from, lives a very rare and shy anteater called the numbat. It looks like a stripy squirrel and is very cute – unless you are a termite. When his extremely long, sticky tongue flashes out to suck you up out of the fallen tree you are living in, the numbat’s cuteness factor must drop to zero.

Best of all, though, in Australia we have the echidna, a creature so weird that its name is taken from the “mother of the monsters” in Greek mythology. So weird that I had to make him into a baddie:

‘Thousands of deaths for one life.’

The echidna is the only living relative of the famously strange platypus. Egg-laying mammals – who would ever have thought of that? Apart from that quirk, many of the echidna’s characteristics – like those of other anteaters around the world – are determined by its function. Its spines evolved as protection against the angry ants that it lives off; its claws serve to break open their nests; its long, flexible tongue is the echidna’s way of feeding.

I liked the idea of a psychopathic human who sees themselves as an echidna at the top of the food chain, feeding off other people as if they were ants. It fits well with the exaggerated sense of superiority and total lack of empathy of many psychopaths:

‘I suck up life. Little pieces of life that don’t matter. So I grow stronger.’

I had the idea of this villain for many years until I found the right occasion to make him live. The Anteater, as is typical of this category of people, is intelligent and smooth-talking and sees his mentality as normal.

My novel is post-apocalyptic fantasy, so I had another aspect to explore. Much of the story takes place inside the minds of the two main characters, where the Anteater appears in effect as an evil spirit. In that mental world, known as the Changeland, his self-image allows him to take on the form of the echidna. Outside, he has a human physical form. This gives a new twist to the shape-shifting idea.

In the days before the apocalypse (a brain disease known as the Great Madness), the Anteater was kept locked in institutions due to his dangerous telepathic psyche. It was his psyche that enabled him to survive the Madness. Now he wants revenge on the remnants of the world that persecuted him before. The Anteater sees himself as the personification of the death drive that killed most of the world’s human population.

‘Ants give out a particular smell when they die. Other ants can sense it and keep away from the smell of death. The Anteater is too clever, though. Whenever he eats an ant, he lifts his head out of the way. The ants don’t smell the death. They never even know the Anteater is there.’

First published on Beauty in Ruins